Have you ever wondered why some people just never get into golf, like the rest of us? Do they not enjoy it? Is it too expensive? I’m sure we all have thought about this at some point. While it’s easy to conclude that “golf just isn’t for everybody”, we wanted to dive a little deeper as to why some people choose to spend their time doing something different.

This month, we conducted a small survey consisting entirely of people who do not consider themselves to be golfers (aka Non-Golfers). The 172 participants range from those who have never played golf to those who play on rare occasions.

It should be mentioned that 60% of the participants were from the ages 25-34. This is because the 121 Marketing team shared the survey on social media channels, to help increase participation. It just so happens to be that most of our friends on Facebook were in this demographic. 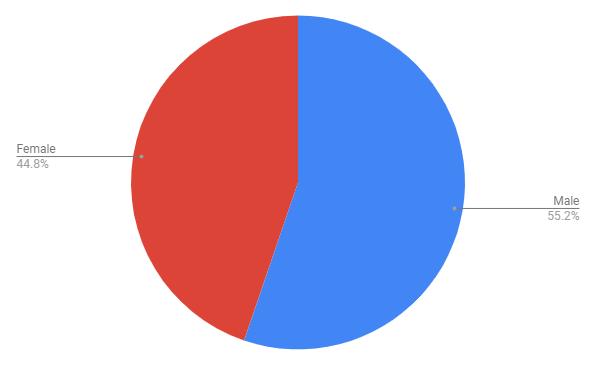 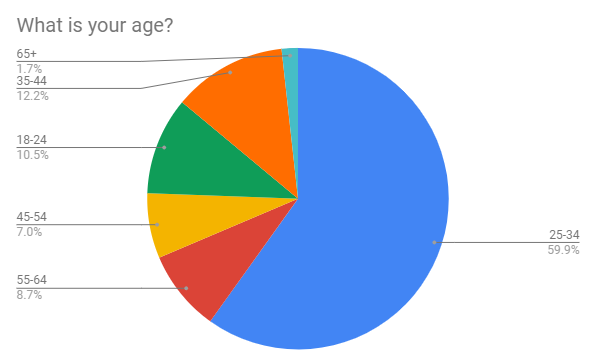 Questions ranging from “Have you ever played golf?” to “What prevents you from playing more golf?” were asked, with a variety of different answers submitted. While some of the findings come as no surprise to those that work in the golf industry, there are some highlights that I believe could be used to help market to these Non-Golfers more effectively.

After establishing the age and gender of the participants, we started the survey with a qualifying question: Have you ever played golf?

Nearly 59% of the 172 participants stated that they’ve played golf at least once before, while the other 41% have not. All but 1 man answered “No” to this question, while only 5 of the 77 women claimed to have played golf before. While I can’t say this came as a complete surprise, it’s clear that women either aren’t getting introduced to the game or they simply aren’t interested. We were able to draw more conclusions as we got further into the survey, which we’ll touch on shortly. 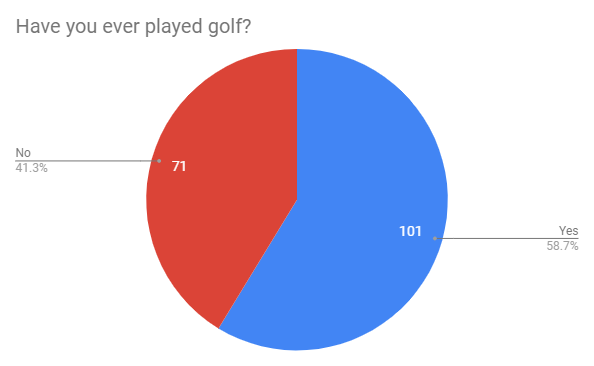 It was important to separate those who have played golf and those who haven’t, in order to ask different questions based upon their answer. Therefore, not every question in the survey was answered by every participant. The following are the different segments that people fell into based on their answers to the first few questions.

We will analyze these segments independently for the majority of this article, as I believe it will help us better understand the Non-Golfer and what influences their decision to participate (or not) in the sport of golf.

Those who have played golf before

After a participant answered “Have you ever played golf?” with a “Yes”, the next question they were faced with was “Do you enjoy golfing?”. This question received 101 responses; 65 – YES, 36 – No. That’s fair. Golf isn’t for everyone. However, it’s great to see that the majority of people that have tried golf enjoy it. 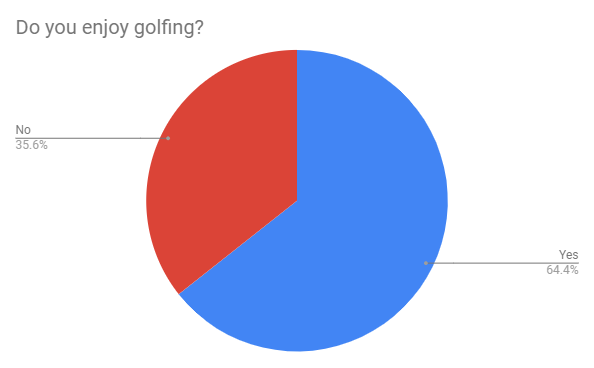 Those who have played and enjoy it

Of those that stated to enjoy golf, we wanted to know why they enjoy it. Also, since these people do not consider themselves to be golfers, what influences their decision to play and prevents them from playing more often.

The 65 participants that enjoy golf where asked: “Why do you enjoy golf?”. Being outdoors, hanging out with friends/family, and drinking adult beverages topped to the reasons for enjoying golf. A couple participants added that they “just like hitting the ball far”. Don’t we all? Keep in mind, the participants were allowed to select multiple responses to this question.

Next, we wanted to find out what influences their decision to choose one golf course over another. Price was the most popular by a wide margin, with the second largest reason being that “someone else books the tee time”. I think it’s fair to say that Non-Golfers aren’t concerned with course layout, atmosphere, or food/drink offerings. These folks seldomly play golf anyways. It likely feels wasteful to pay $40+ for a round of golf that they won’t be able to fully appreciate.

Remember, these people want to be outdoors, enjoy their friends’ company, and have a few drinks. It’s not about the golf. The golf course is simply a vehicle for a good time to this group of people. You’re competing against the beach, the lake, the local bar/brewery, brunch, the farmer’s market, the pool and a whole host of other places, a lot of which are virtually free. Hence why the price is such a big factor, as it is for most things. 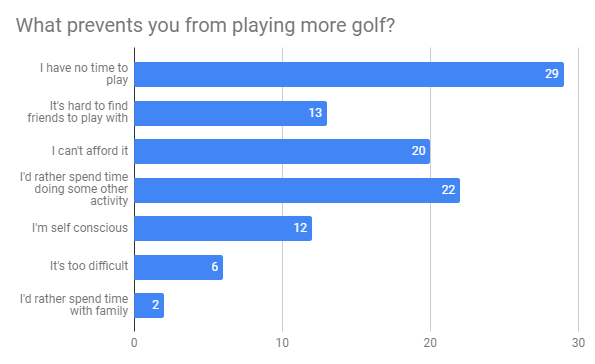 So, if these people claim to enjoy golf, why don’t they play more often? That’s what we asked next. Turns out, people either don’t have the time or they’d just rather spend their time doing something else. 30.8% of these people also said they just couldn’t afford it. Considering that the largest group of participants in this survey were in the 25-34 age range, I can see cost being a legitimate limitation for some. Believe it or not, there was a limited response to “I’d rather spend time with family”, likely due to the younger demographic that participated in the survey.

At the end of the survey, we asked: “What, if anything, would get you to play golf more often?”. Of the 37 responses we received, almost every answer had to deal with lowering costs, finding more time to play, or finding others to golf with of a similar ability level. I believe no matter how affordable golf gets, the price will always be the #1 complaint for Non-Golfers. Finding time to play, again, will always be a limiting factor. I know avid golfers that can’t find time to enjoy their favorite activity, so it comes as no surprise that more casual golfers have it lower on their priority list.

But what about the last one? These people are saying they would play more often if they had others to golf with. With golf being as difficult as it is, it can be nauseating for a beginner to think about getting partnered up with 3 other experienced golfers. What if there was a way to ensure these people could get partnered up with other beginners? Or if there was a beginners-only program at the course that allowed these people to play together and get to know each other? I digress, but there’s some brain food for you.

Those who have played, but do not enjoy it

When someone tells me they don’t like to golf, I always wonder “Why?”. This survey recommends that the time it takes to play a round of golf, cost, and difficulty prevent some people from enjoying it. The time commitment that golf requires is a concern that none of us can deny. We keep hearing about more golf facilities offering 3-hole rounds or even Pay-Per-Hole options, like Quick Golf, but have yet to see these ideas become staples in the golf industry. It’s likely a matter of time before an idea like this becomes mainstream enough that even the Non-Golfer would know it’s available to them. 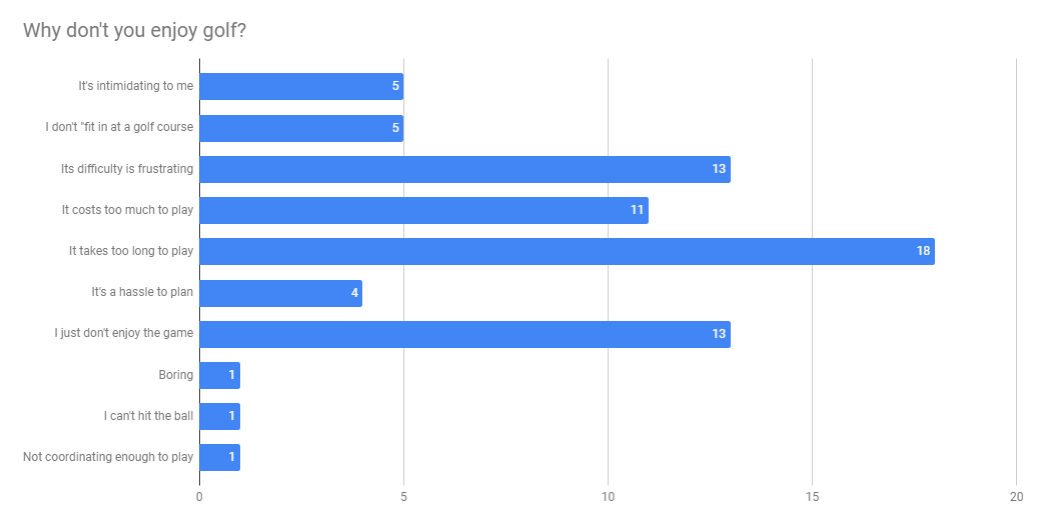 Not just to play 18 holes, but the practice time that’s put into getting to point where you can make a good connection with the ball is a huge time commitment. Golf is difficult, which turns some people away, but makes it addictive for others. There have been attempts at making golf easier, with bigger cups and shorter holes, but are you robbing Peter to pay Paul in that case?

I believe the only way to get over the difficulty hurdle is to make learning the game of golf more fun and less intimidating. The way to do this is in a group atmosphere, with other beginner-golfers on the same level, where it’s made evident that it’s okay to whiff a few balls and laugh it off. I’ve seen some golf facilities offer beginner golf packages, that start with a few group lessons and include a round of golf at the end. It’s encouraged to play with the others in the group and learn the game together. I imagine this not only gives the beginners the learning atmosphere they’re looking for, but potentially gives them “golf buddies” that they’ll be friends with for life.

Those who have never played golf

41.3% of the participants that took our survey have never played golf, most of who are women. However, when I started looking at the answers to “What has prevented you from trying golf?”, it got me thinking. The #1 answer was that they never had the desire to play golf, by a fairly wide margin. “I’ve never been asked to play golf” and “None of my friends play golf” are the #2 and #3 responses, as well. Considering this question was answered by mostly women, I think this highlights where golf is missing its mark. Does this mean golf isn’t marketed well to women? Is it too much of a boy’s club? Things like cost and time, both primary concerns for those who have played golf before, pale in comparison. 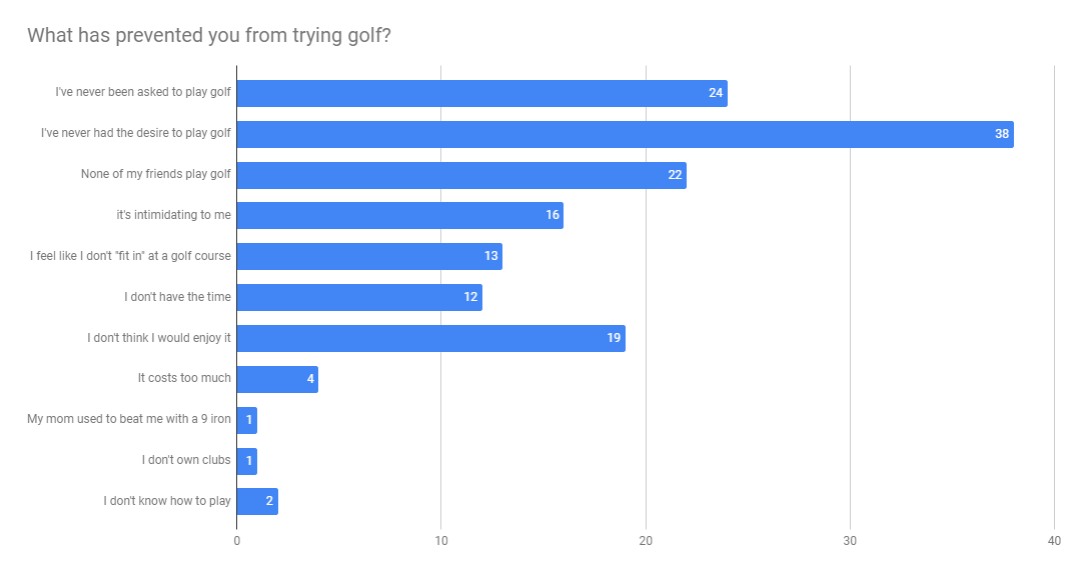 The next question is “Would you be open to playing golf if asked?”. The responses to this question only deepen my concerns further. Less than 10% of the people that answered this question responded with “No”, while over 50% said “Yes”. To me, that makes it pretty clear that women aren’t averse to golf, they just haven’t had the opportunity present itself. 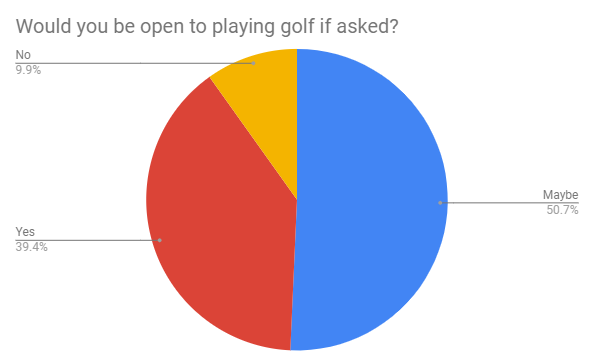 Think about how you were introduced to the game of golf. It was likely through a parent, friend, or relative. Odds are, that person was a male. I, for one, was dragged out to the golf course by some friends. Women don’t have those same influencers, encouraging them to give golf a try. At least, not at the volume that men do. It’s not that women won’t golf, it’s that they’re not being invited to golf. And without the motivation from their peers, they’ll continue to pass on this sport. While the LPGA does a great job combating this issue with the #inviteHER movement, I believe there is more than can be done at the individual golf course level.

The results of this small survey that we conducted back up what golf industry organizations like the NGCOA and PGA have been saying for years. This shouldn’t come as news to anyone reading this article. While this survey wasn’t professionally conducted and has a relatively small sample size, I find it interesting and helpful to revisit this topic from time to time. With everyone in the industry asking the question “How do we grow the game?”, using data like this will hopefully inspire course operators to adjust their programming and reevaluate who they’re marketing to. 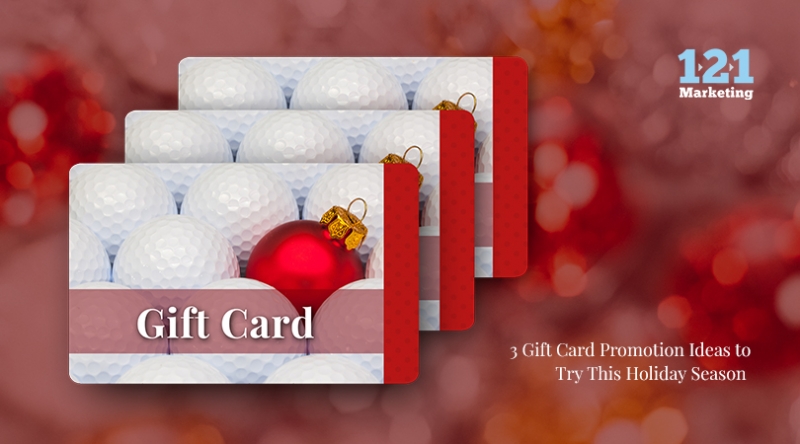 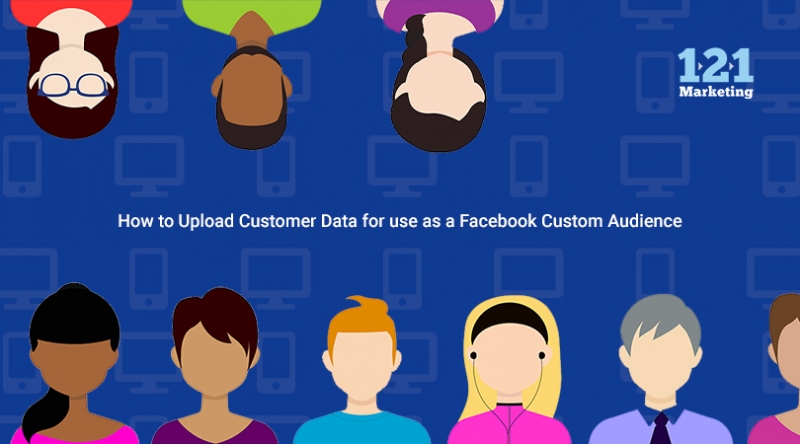 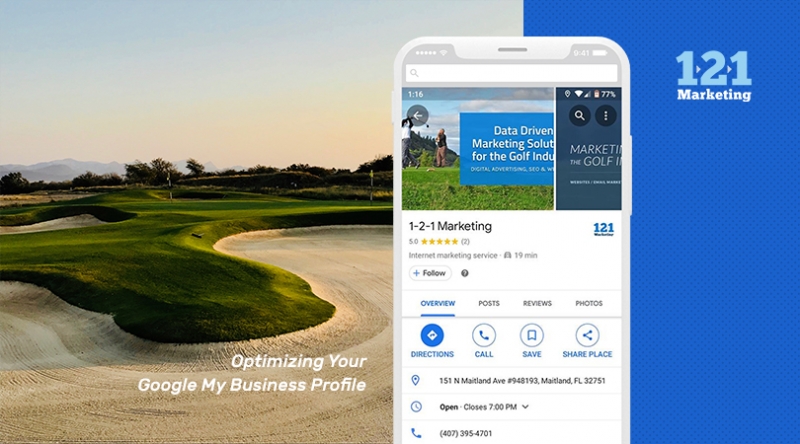 Optimizing Your Google My Business Profile